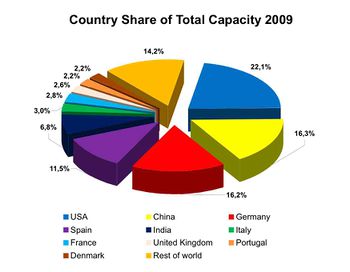 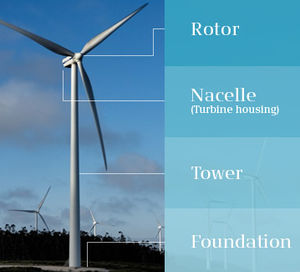 Foundation: A very good foundation is required to support the tower and various parts of a wind turbine which weighs in tonnes.

A tower that supports the nacelle and rotor hub at its top. These are made from tubular steel, concrete, or steel lattice. Height of the tower is an important in design of HWAT. Because wind speed increases with height, taller towers enable turbines to capture more energy and generate more electricity. Generally output power of the wind system increase with increase in height and also reduces the turbulance in wind. The theoritical view of tower height versus power out is shown in figure 7 . click on the link to get more about towers Wind Turbine Towers 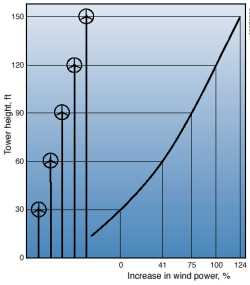 Wind turbine blades are used to extract the kinetic energy of wind and convert to mechanical energy. These blades are made up of fiber glass-reinforced polyester or wood-epoxy. Wind turbines have one or two or three or multiple blades based up on the construction. Most of the HAWT have three blades. These are connected to rotor hub. Multiple blade concept is used in earlier days for pumping water and grinding etc.

A housing which contains all the components which is essential to operate the turbine efficiently is called a nacelle. It is fitted at the top of a tower and includes the gear box, low- and high-speed shafts, generator, controller, and brakes. A wind speed anemometer and a wind vane are mounted on the nacelle. 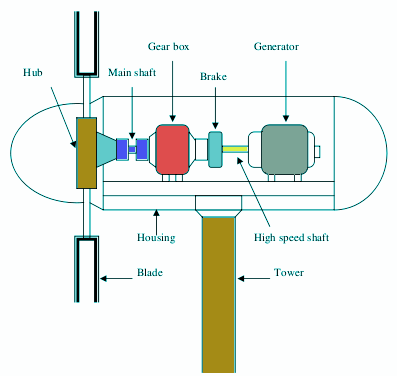 Hub A rotor hub is provided for coupling a wind turbine rotor blade and a shaft. The hub assembly consists of hub, bolts, blade bearings, pitch system and internals . Rotor hubs are made with welded sheet steel, cast iron, fored steel. The types of rotor hubs are 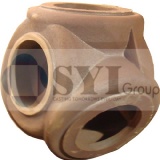 Main shaft: It is connected between blade hub and input to the gear box. It rotates at low speeds. So It is also called as 'low speed shaft'.

Generator shaft: It connects the gear box output to the generator input. It rotates at very high speed equals to the rating of the generator. It is also called 'high speed shaft'. 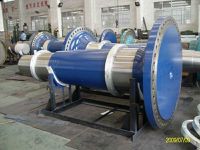 Gear box Gear box used in wind energy systems to change low speed high toque power coming from a rotor blade to high speed low torque power which is used for generator. It is connected in between main shaft and generator shaft to increase rotational speeds from about 30 to 60 rotations per minute (rpm) to about 1000 to 1800 rpm. Gearboxes used for wind turbine are made from superior quality aluminum alloys, stainless steel, cast iron etc.

The various gear boxes used in wind turbines are 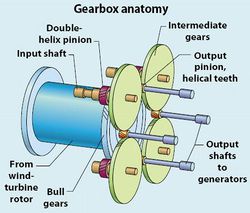 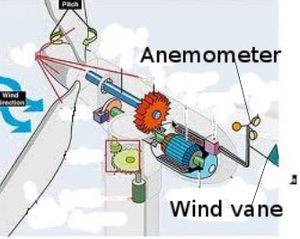 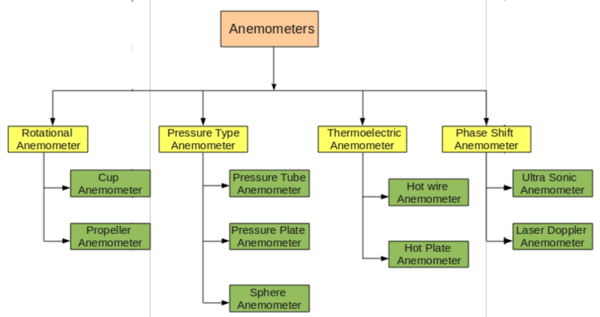 Wind vane Wind vanes are used to measure the wind directions and communicates with the yaw system to orient the turbine properly with respective to wind directions, to extract maximum amount of power from wind. Wind turbines are oriented to upstream wind or down stream wind.

yaw mechanism turns the rotor into the upwind direction as the wind direction changes. Electric motors and gear boxes are used to keep the turbine yawed against wind. This can be also used as controlling mechanism during high wind speeds. 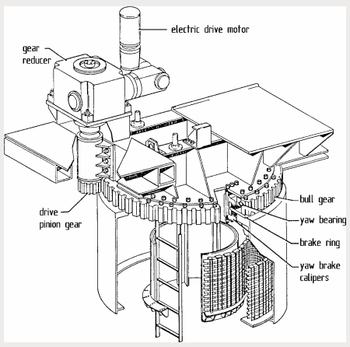 The various types of electrical generators are used in wind energy systems are shown in figure. 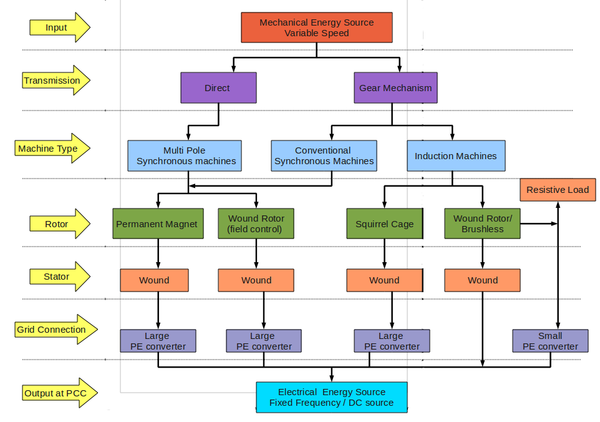 complemented by growth in other Asian markets, including Japan, Taiwan, South Korea and the Philippines, and potentially some others