Patent valuation for a Communication firm

The major claim of XXXXXX is that of a multimode communication device -- It is a device that allows a phone or device to have more than one network e.g. Apple i-Phone has both Wi-Fi & Mobile capabilities. Similarly some new phones even claim both GSM & CDMA capabilties.

The Application is a continuity of Patent No. XXXXXXX which essential talks about supporting voice communication via packet network.

The Patent is in turn a continuity of Patent No. XXXXXXX which covers communication network system which supports the transmission of both voice and Data.

The patent is in turn a continuity of Patent No. XXXXXXX which in essence is a wireless communication network supporting the trasmission of voice and Data inside a premises.

The filing date of Patent No XXXXXX is Oct Xth 19XX, that means that if granted XXXXX will have a period till Oct XXth 20XX. [USPTO PAIR]

Fixed Mobile Convergence is a service in which the same handset has access to services through a fixed network in addition to a wireless network. The same handset can be used in the home and office and also send and receive cellular calls when traveling in the wider world.

FMC suffered early on from too many technical approaches and too few standards. A number of operators conducted trials but hesitated to commit to full deployment. Fortunately, that period is behind us. Standards have been established and the industry seems to have coalesced around the dual mode WiFi/cellular approach. Operator trials have been replaced by new product announcements and large scale deployments have begun—at least in the consumer segment.

FMC can be accomplished in a variety of ways. Figure I-1 compares three of the most common FMC configurations in consumer homes with the existing scenario: Wireless substitution, Voice over Wireless Local Area Network (VoWLAN), and Fixed Cellular.[Insight Research] 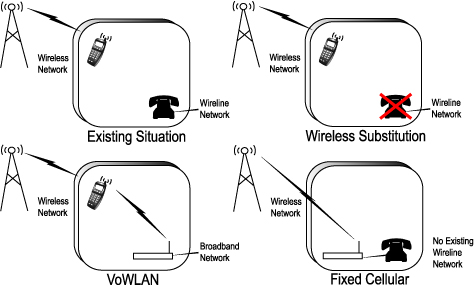 A dual-mode phone is a telephone which uses more than one technique for sending and receiving voice and data. This could be for wireless mobile phones or for wired phones.

There are three types of dual mode phones: 1. Network Compatibility : Mobile phones containing two types of cellular radios for voice and data. These phones include combination of GSM and CDMA technology

3. Wired Phones : Wired phones with VoIP and POTS technology. These phones can be used for making VoIP calls and also used for phones on the circuit switch network [Wikipedia - Article on Dual Mode Mobile]

We will limit our analyses to the second type,

Why add Wi-Fi to cell phones? 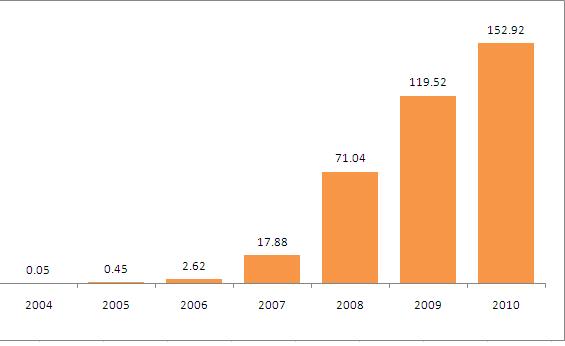 As indicated by [Espacenet] all the forms in which the patent has been published are restricted to US, thus for the same reason, we shall restrict our analysis to the US too.

Forecast for US Market

* UPDATE: The patent is now valid till 12th May 2020 (extension by USPTO) thus these valuations need to be extended till 2020.

Calculation of Value of IP

Logic for Pricing The device claims include