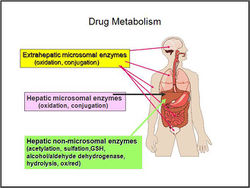 Drug metabolism is a detoxification function the human body possesses to defend itself from environment hostility. Ideally, a drug should reach the site of action intact, cure the disease, and leave the body after it completes its mission. However, drug developers often face the dilemma that a potential drug is either metabolized/excreted from the body too fast, that the drug can not reach its therapeutic effect, or too slow, that it stays in the body for a long time, causing side effects.(Drug is a xenobiotic that the normal human body doesn't need.) The study of drug metabolism, therefore, serves primarily two purposes

The liver is the primary site for metabolism. It contains the necessary enzymes for metabolism of drugs and other xenobiotics. These enzymes induce two metabolism pathways:

Drug metabolism is basically a process that introduces hydrophilic functionailities onto the drug molecule to facilitate excretion. When the drug molecule is oxidized, hydrolyzed, or covalently attached to a hydrophilic species, the whole molecule becomes more hydrophilic, and is excreted more easily. Although liver is the primary site for metabolism, virtually all tissue cells have some metabolic activities. Other organs having significant metabolic activities include the gastrointestinal tract, kidneys, and lungs. When a drug is administrated orally, it undergoes metabolism in the GI track and the liver before reaching systemic circulation. This process is called first-pass metabolism. First-pass metabolism limits the oral bioavailability of drugs, sometimes significantly.

GW844520, a non-chiral 4(1H)-pyridone derivative, is a potent, selective inhibitor of Plasmodium mitochondrial function blocking the electron transport chain machinery. The site of action of this class of compounds is cytochrome b, a critical element of the respiratory complex III or bc1 complex.

Plasmodium falciparum is the species of malaria parasite that predominates in Africa and is the cause of most of the mortality from malaria worldwide. Effective treatment options are often restricted due to drug resistance, particularly for P. falciparum. There is an immediate need to develop novel anti-malarial agents that provide rapid and effective treatment.GW844520 is fully active against isolates carrying resistance determinants to marketed agents and shows no cross-resistance with agents in current use, including atovaquone.