Intensive-care Unit (ICU) ventilators offer a wide range of breathing patterns, pressure controls, alarms and sensors. They use compressed oxygen and other gases stored in cylinders, ambient air or a mixture of both. Breathing circuits for these ventilators are double-limbed and can be quite complex. These ventilators are made for bedside use in the intensive-care units of hospitals. The key data provided by the device include:

The market data for ICU ventilators in China is not readily available in public domain. There are paid reports published by various market research firms in which the data is either modeled using indicators or collected through primary research methods. 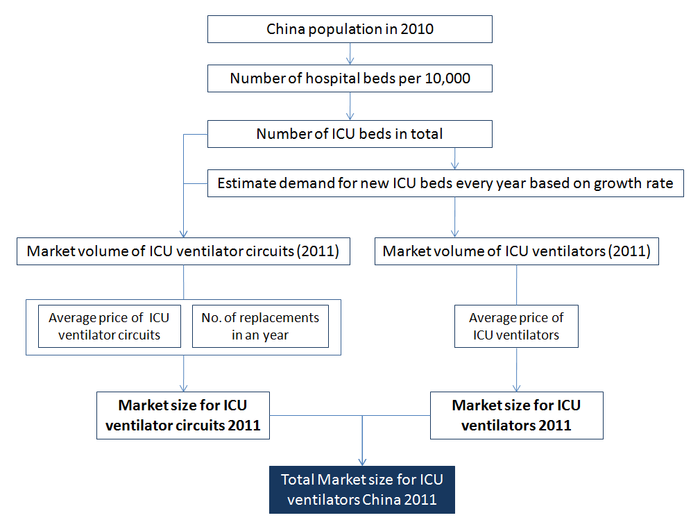 Assumptions: Each ICU bed will be equipped with one ventilator.

According to 2010 census, the total population of China is estimated as 1,339,724,852. The number of hospital beds in China as per WHOSIS is 22 per 10,000 population. A research paper on critical care medicine in mainland China which analyzed many papers including the one from China Critical Care Clinical Trial Group (CCCCTG) estimated the % of ICU beds as total number of hospital beds as 1.8%.

China has taken proactive measures to control the population growth and hence it would not be a relevant indicator for growth in ICU beds. There are several factors to be considered in estimating the growth rate of ICU beds in China. 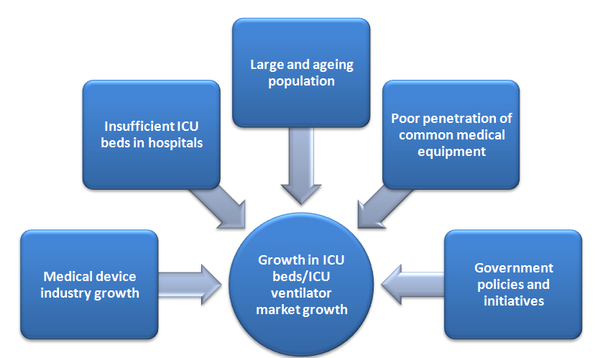 Based on the above factors the yearly growth rate in number of ICU beds is estimated to be 11.15%.

The Indian ICU Ventilator market (adult) for the year 2009 was valued at $ 39 Million with volume sales of 1,605 units. Source: Expert Inteviews of Leading Players by Medicalbuyer

The figures using our methodology are coming to $ 40 Million with volume sales of 1,674 for the year 2009. This proves the accuracy of our methodology.