This report contains a detailed description about cardiac pacemakers, its working, market potential, growth drivers and an in depth competitor analysis.Government policies and reimbursement have also been covered comprehensively.The report contains a detailed company profile of Cardiac Science Corporation and also throws light on the recent trends and developments related to cardiac pacemakers. 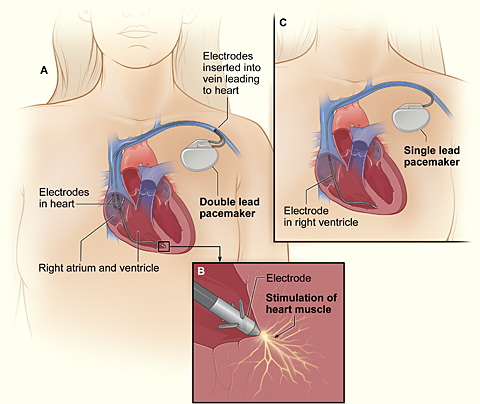 A pacemaker (or artificial pacemaker, so as not to be confused with the heart's natural pacemaker) is a medical device that uses electrical impulses, delivered by electrodes contacting the heart muscles, to regulate the beating of the heart. The primary purpose of a pacemaker is to maintain an adequate heart rate, either because the heart's native pacemaker is not fast enough, or there is a block in the heart's electrical conduction system. Modern pacemakers are externally programmable and allow the cardiologist to select the optimum pacing modes for individual patients. Some combine a pacemaker and defibrillator in a single implantable device. Others have multiple electrodes stimulating differing positions within the heart to improve synchronisation of the lower chambers of the heart.

A pacemaker system consists of a battery, a computerized generator, and wires with sensors called electrodes on one end. The battery powers the generator, and both are surrounded by a thin metal box. The wires connect the generator to the heart. 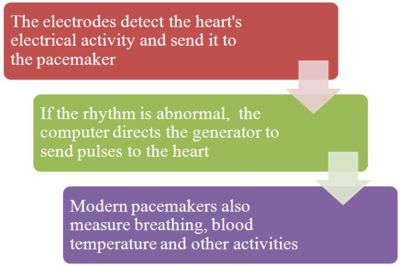 The evolution of cardiac devices has opened new vistas in the health care industry. Growth rate exhibited by the cardiac devices industry, even during the recession years, confirms the positive growth prospects going ahead.The cardiovascular (CV) device industry is highly competitive and has reached maturity resulting in single digit growth rates of prominent devices such as pacemakers, defibrillators, and drug eluting stents (DES). 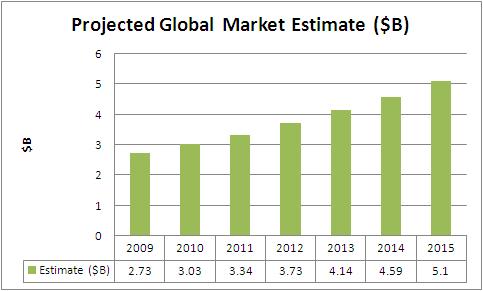 The cost for Pace Maker treatment in US is around $100,00 whereas its around $10,000 in India.The CV device industry is highly regulated around the world with stringent guidelines defined by regulatory bodies. The medical device approvals by governing bodies such as the FDA in the US have become very meticulous and CV device manufacturers are launching products outside the US such as Europe and Canada. Since the prices are strictly regulated outside the US, manufacturers will be forced to launch their roducts in the US for a similar price. In the long run, the pricing pressures would continue to prevail and limit the profitability margins for CV device manufacturers.

The impact of economic recession since 2008 had forced hospitals to decrease their capital expenditure by almost 6%. This decline has impacted the medical devices industry across all sectors in the CV device division. Some segments of the CV device industry such as ICD, pacemakers, heart valves and stents will remain insulated from the economic impact given their non-elective nature of associated procedures. other low budget, high-frequency CV accessories that hospitals purchases on a regular basis will be affected due to decline of capital expenditures.

Though the death rates from CVD have declined, yet the burden of the disease remains high.

Prevalence rates according to age and gender 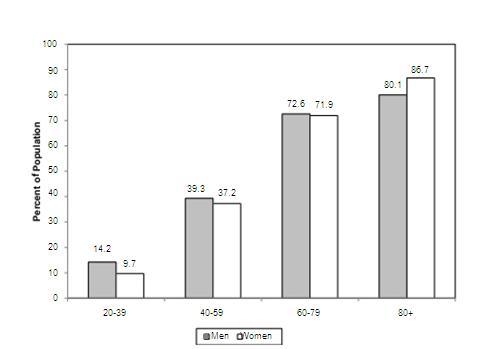 As per American Heart Association,the 7 metrics of cardiovascular diseases identified are:

The graph below depicts the number of deaths(in thousands) due to cardiac problems. 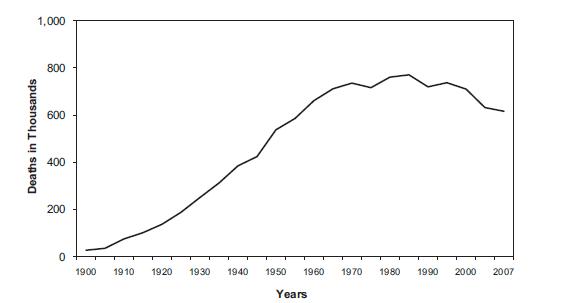 The decline towards the end is due to advancement of medicine and science which has resulted in better healthcare facilities. 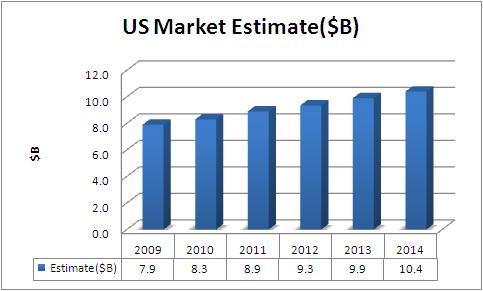 Government programs directly cover 27.8% of the population (83 million), including the elderly, disabled, children, veterans, and some of the poor, and federal law mandates public access to emergency services regardless of ability to pay. Public spending accounts for between 45% and 56.1% of U.S. health care spending.As per Per-capita spending on health care by the U.S. government,it is among the top ten highest spenders among United Nations member countries in 2004.

Medicare covers cardiac pacemakers when provided by a hospital, skilled nursing facility, home health agency,comprehensive outpatient rehabilitation facility (CORP), or a rural health clinic.Most insurers provide coverage for device therapy, the insurance plan should be designed accordingly.It will, though, depend on age, medical condition or status, income or employer and where a person lives. 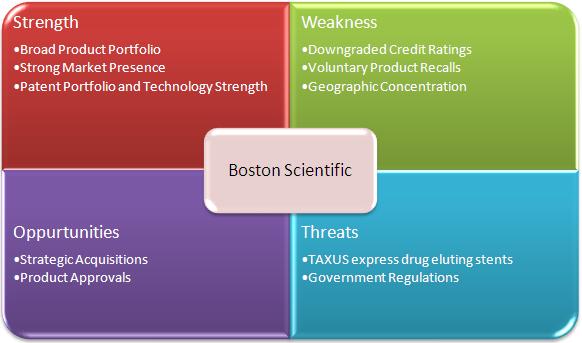 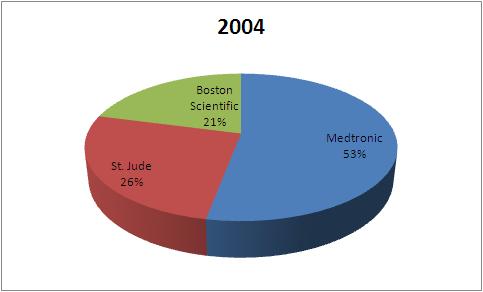 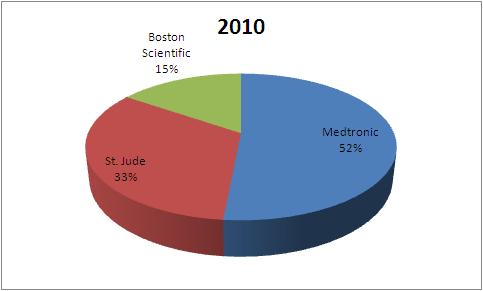 This data tells that the market share of Boston Scientific has fallen in Pacemaker market from 2004 to 2010.

Medtronic found that the doctors in Inda and China saw some of the current state of art features as unecessary and too expensive.Instead, they wanted an affordable pace maker which was cheap and easy to implant.This led medtronic to develop a new pace maker, Champion aimed towards asian market segment.

For the five-year marketing plan of Medtronic,marketing mix activities include the following:

In 2004, St. Jude invited companies to be a part of the Thanks and Giving® campaign, an unprecedented union of celebrities, media retail and corporate partners that asked consumers to “Give thanks for the healthy kids in your life, and give to those who are not.

Cardiac Science is a global medical device company and a subsidiary of Opto Circuits (India) Ltd. Company employ more than 550 people worldwide. Global capabilities include direct and indirect sales personnel and distribution in more than 100 countries and an extensive worldwide service network. Cardiac Science Corporation was formerly known as Quinton Cardiology Systems, Inc., and changed its name in September 2005. The company was founded in 1913 and has operations in California, Wisconsin, China, Central Europe, Denmark, France, and the United Kingdom.

• Devices designed to identify the early stages of heart disease — such as electrocardiographs,cardiac stress testing systems,diagnostic workstations and Holter monitors.

• Innovative and patented automated external defibrillators(AEDs) that provide assistance to victims of sudden cardiac arrest for both medical and public markets.

The Company was very active in Corporate Development during 2009, forging a host of new partnerships and alliances that will contribute to future growth and profitability.

Patni specializes in the design and engineering of Class II and III medical devices and is a global leader in providing high-quality, reliable, and cost effective Product Engineering and IT Services. One of the company strategies is to increase the volume and frequency of new product introductions, particularly in Cardiac Monitoring. Company have great brands and distribution channels and want to better leverage. This agreement, dramatically increases companies engineering capacity and allows internal team members to focus on changing market dynamics, new customer solutions, and new revenue opportunities. 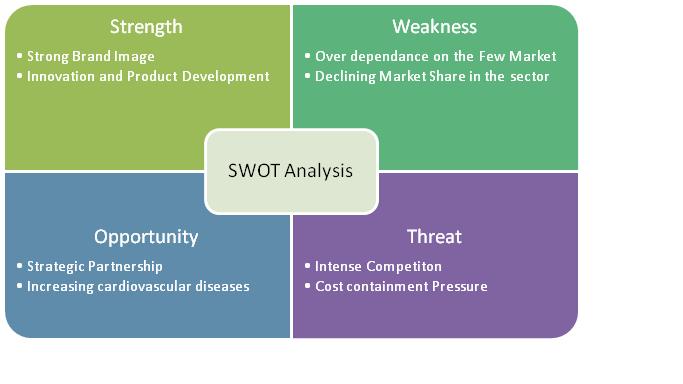 All figures in US$ (thousands) 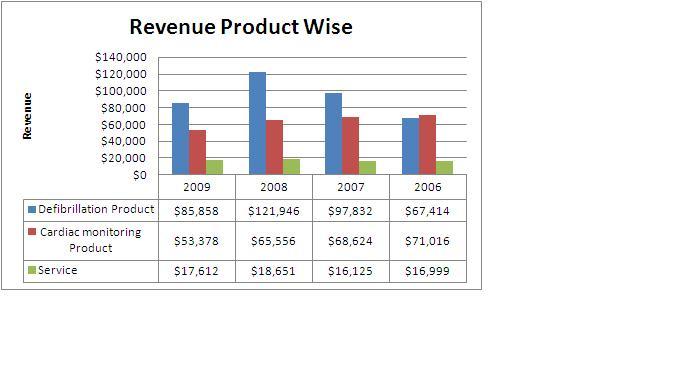 This shows that other than USA, Japan is a big potential market for cardiac pace makers. Also it shows dependence of Cardiac science corporation on few markets like USA and Japan.

The National Institute on Aging’s Cellular Biophysics Section is seeking statements of capability or interest from parties interested in collaborative research to further develop, evaluate, or commercialize biological pacemakers.
Technology:
A common symptom of many heart diseases is an abnormal heart rhythm or arrhythmia. While effectively improving the lives of many patients, implantable pacemakers have significant limitations such as limited power sources, risk of infections, potential for interference from other devices, and absence of autonomic rate modulation.
The technology consists of biological pacemakers engineered to generate normal heart rhythm. The biological pacemakers include cardiac cells or cardiac-like cells derived from embryonic stem cells or mesenchymal stem cells. The biological pacemakers naturally integrate into the heart. Their generation of rhythmic electric impulses involves coupling factors, such as cAMP-dependent PKA and Ca2+-dependent CaMK II, which are regulatory proteins capable of modulating/enhancing interactions (i.e. coupling) of the sarcoplasmic reticulum-based, intracellular Ca2+ clock and the surface membrane voltage clock, thereby converting irregularly or rarely spontaneously active cells into pacemakers generating rhythmic excitations.
Applications:
This technology can be utilized in heart disease characterized by arrhythmia or situations requiring an implantable cardiac pacemaker.
Advantages:
In contrast to current implantable cardiac pacemaker technology, this technology is not externally powered, has a lower risk of infection, has decreased potential for interference from other devices, and has full autonomic rate modulation.
Development Status:
Early stage.
Patent Status:
U.S. Provisional Application No. 61/180,491 filed 22 May 2009