A cellular mobile communications system uses a large number of low-power wireless transmitters to create cells — the basic geographic service area of a wireless communications system. Variable power levels allow cells to be sized according to the subscriber density and demand within a particular region. As mobile users travel from cell to cell, their conversations are handed off between cells to maintain seamless service. Channels (frequencies) used in one cell can be reused in another cell some distance away. Cells can be added to accommodate growth, creating new cells in unserved areas or overlaying cells in existing areas. Source

There are three main entities in cellular communication

Cellular systems are increasing in demand as more users are added to their systems. The amount of frequency spectrum available for mobile cellular use was limited, and efficient use of the required frequencies was needed for mobile cellular coverage. In modern cellular telephony, rural and urban regions are divided into areas according to specific provisioning guidelines. Provisioning for each region is planned according to an engineering plan that includes cells, clusters, frequency reuse, and handovers.

A cell is the basic geographic unit of a cellular system. Cells are base stations transmitting over small geographic areas that are represented as hexagons.

A cluster is a group of cells. No channels are reused within a cluster. Normally a cluster has seven cells in it as shown below.

The number of radio channel frequencies is limited. The concept of frequency reuse is based on assigning to each cell a group of radio channels used within a small geographic area. Cells are assigned a group of channels that is completely different from neighboring cells. The coverage area of cells is called the footprint. This footprint is limited by a boundary so that the same group of channels can be used in different cells that are far enough away from each other so that their frequencies do not interfere.

As a service area becomes full of users, this approach is used to split a single area into smaller ones. In this way, urban centers can be split into as many areas as necessary to provide acceptable service levels in heavy-traffic regions, while larger, less expensive cells can be used to cover remote rural regions.

There are predominantly three types of multiple access methods.

In this system, each user is allotted a different set of frequencies to operate upon. The uplink(mobile to base station) frequency is different from downlink frequency(base station to mobile).

In this system, each user is allocated a different time slot. Forward link frequency and reverse link frequency is the same. A synchronous switch is responsible for the time switching.

There is no restriction on time and frequency in this scheme. All the users can transmit at all times and at all frequencies. Because users are isolated by code, they can share the same carrier frequency, eliminating the frequency reuse problem encountered in other technologies. 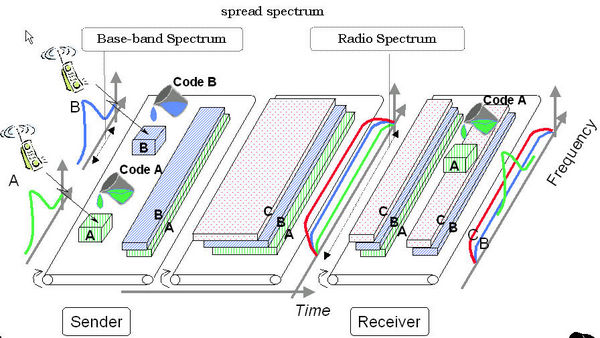 A comparative study between the above three access technologies with respect to time and frequency is as shown below. 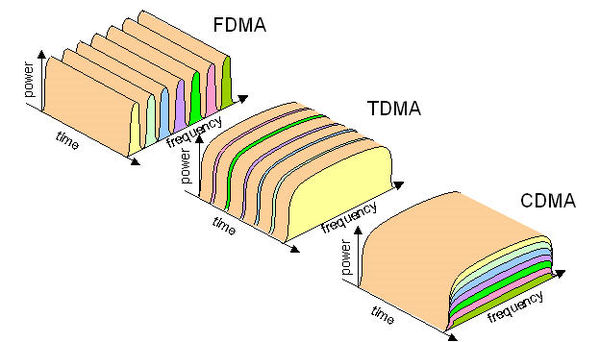 In this method, the direct sequence(input data) which is spread over a limited bandwidth is multiplied with a code or spreading sequence (a pseudorandom sequence also known as PN sequence) which will spread the input data over the entire bandwidth of the communication channel. The power density is also reduced and is spread over the frequency spectrum and hence is known as spread spectrum method. The modulation part of DSSS is as shown below. 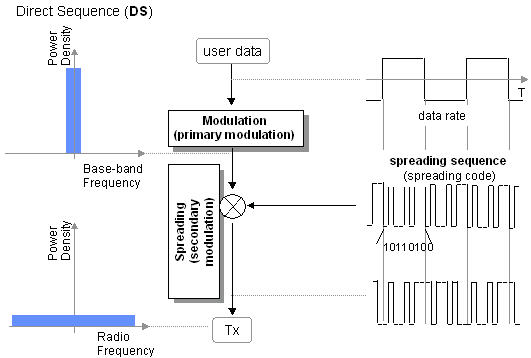 The modulated signal is transmitted over the channel and all users can receive it but only the user which knows the correct code can decode the message. This is depicted in the figure below. 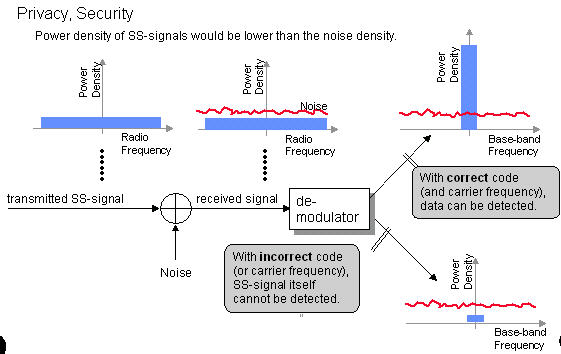 The number of radio channel frequencies is limited. The concept of frequency reuse is based on assigning to each cell a group of radio channels used within a small geographic area. Cells are assigned a group of channels that is completely different from neighboring cells. The coverage area of cells is called the footprint. This footprint is limited by a boundary so that the same group of channels can be used in different cells that are far enough away from each other so that their frequencies do not interfere. ...

Handoff means switching a cellular phone transmission from one cell to another as a mobile user moves into a new cellular area. It is so called because the radio link with the previous sector(s) is not broken before a link is established with a new sector; this type of handoff is described as "make before break". In CDMA, due to this soft handoff, there is no interruption of call even at the border of a cell site which means more number of customers can be accommodated, automatically increasing the capacity of the cell site.This is make-before-break technology.

In a mobile environment, a mobile station will receive one direct signal from the base station and multiple signals which are reflected from obstructions like buildings and towers. Each signal would have travelled a different length and would be displaced in time. Due to this, when they are combined at the mobile handset, it will cause interference resulting in poor signal quality. This is known as fading. This problem is handled in a very good way in CDMA. Here, the phase of the multiple signals is modified such that only positive interference(addition) takes place and the overall signal strength increases. A receiver that implements the above principle is known as a RAKE receiver as shown in the figure below. 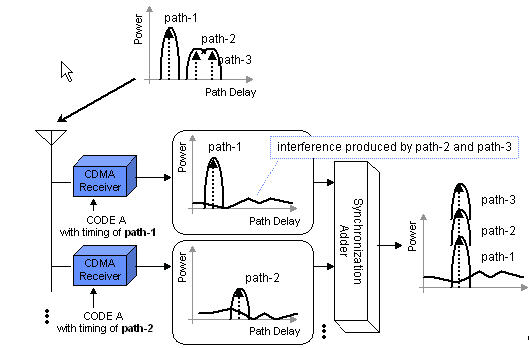 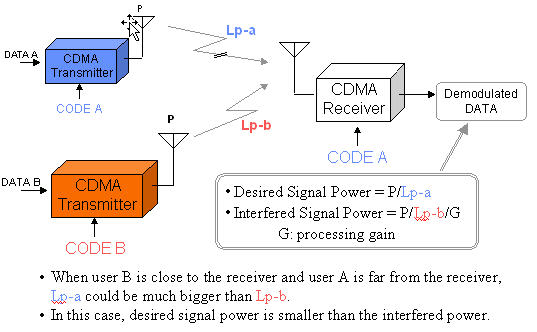 As the propagation losses between BS and MS's are different according to individual communication distances, the received levels at the base station are different from each other when all mobile stations transmit their signals at the same power. Moreover, the received level fluctuates quickly due to fading. In order to maintain the strength of received signal level at BS, power control technique must be employed in CDMA systems.
. 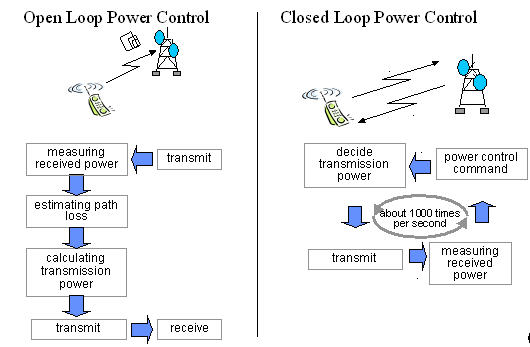 Effect of Power Control: Power control is capable of compensating the fading fluctuation. Received power from all MS are controlled to be equal. Near-Far problem is mitigated by the power control.