Quality of Service on CDMA platforms

CDMA is being accepted as a third generation (3G) system and a specific feature of 3G systems is that they offer a radio interface adapted for all kinds of services and combination of services (such as data, voice, video etc). The big challenge is multiplexing these services which do not have the same demands in terms of quality of service(QoS) which can be represented as BER(bit error rate), processing delay, frame error rate etc. Different QoS will require different channel encoding and interleaving strategies. The demand of BER can be satisfied when the coding bits have at least a code dependent ratio Eb/I(ratio of bit energy to interference).

In a system using Multiple Access CDMA technology, the greater the Eb/I ratio the greater is the QoS. Transport channels having different QoS requirement do not have the same need in terms of Eb/I ratio. If all the channels are allocated a fixed Eb/I ratio which corresponds with the maximum required by a transport channel then other channels will have "too" good a Quality of Service, needlessly causing interference and resource blocking. There are several influences that might change system performance(BER) and hence Eb/I ratio,in accordance with the required QoS of which the most effective is variation of Bit Rate by a step of Rate Matching. The standard framework for the management of QoS in CDMA systems is shown below. The following framework highlights the various steps involved in providing variable QoS. The received data from the transport block is classified into different processes based on their QoS. Data is split onto various transport channels to which a CRC code is attached for error correction. Further, all these transport channels are multiplexed on one line by concatenation, interleaved, segmented and then rate matched. The rate matching step is performed using the rate matching ratio and puncturing ratio which is received from the sending entity (an exchange of handshaking signals occurs). 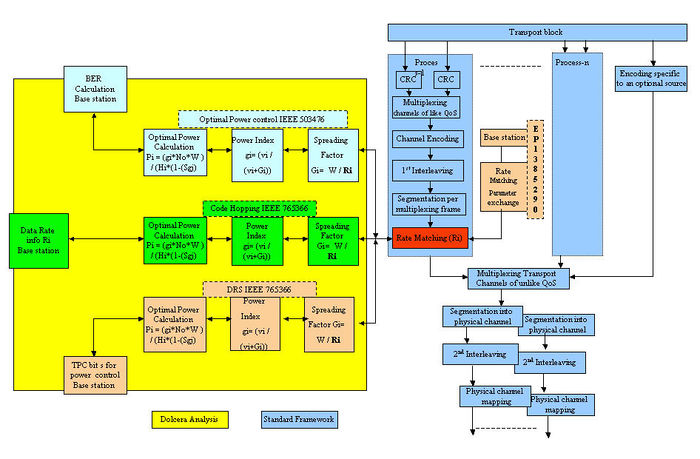 The rate matching step in above figure is essentially implemented by repetition or puncturing, SIEMENS has proposed an algorithm to ETSI, to obtain a non-integer punture/repetition ratio referenced SM/G2/UMTS-L1/Tdoc428/98 and it is given as follows. This algorithm is used as a standard approach for Rate Matching. 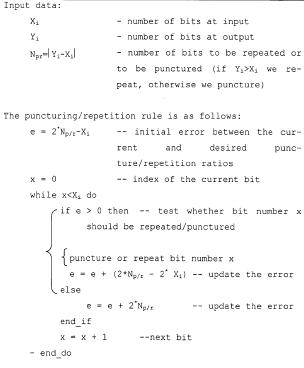 Quality of Service can be managed according to the varying type of traffic i.e. data, voice, video in the following four ways. 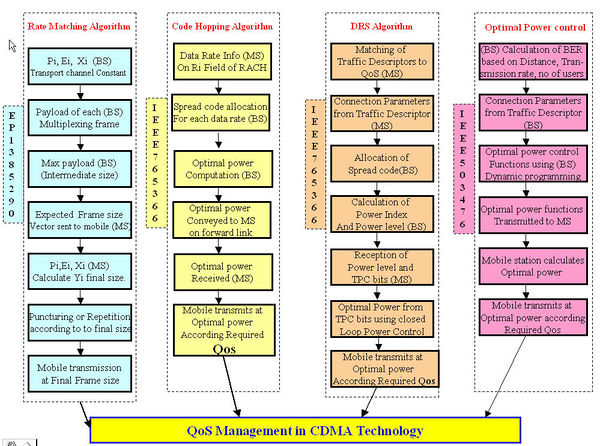 The patent EP1385290 titled "Method for balancing Eb/I ratio in a service multiplexing CDMA system and a telecommunication system using this method" targets this concept of Rate matching and introduces an algorithm for calculating effective data output bits by a process of repetition or puncturing of the input bits governed by a rate matching ratio and puncturing ratio received from the sending entity (can be a BS or MS). As the number of services increases the number of potential combinations will also increase. There arises a need for simple arithmetic procedures to calculate the transport sizes which is done using the following three rules.

The Parameters Ei(Energy per bit),Pi(Max puncture Rate) and Xi(Input data rate) are the characteristic constants of a transport channel both at the Mobile Station(MS) and the Base Station(BS). Initially Ei,Pi and Xi are determined at the Base Station and a maximum possible payload is calculated. This is known as the intermediate size and and a vector of expected is transmitted to the Mobile Station(MS) along with the parameters Ei and Pi. Using the values of Pi,Ei and Xi the mobile will also calculate its output frame size Yi. Then final step is matching this value of Yi with the received vector of Intermediate values Yi and decide the final frame size. The bits are repeated or punctured according to the required Final Frame Size.

According to one of the methods of dynamic power control (Code Hopping) used in W-CDMA technology, the Rate Information (RI) field in the uplink control channel in W-CDMA frame can be used to notify the base station about the variable bit rates (VBR) it wants to send, then the base station assigns a new spreading factor for each data rate and hence the optimal power calculation is done according to the spreading factor as follows.
Spreading factor(Gi) is defined as the ratio of bandwidth of the system to the data rate of the radio frame. Mathematically,
Gi = W / Ri,where W=system bandwidth which is a constant for a system and Ri= data rate of radio frame.
A power index (gi) is calculated from this Spreading Factor(Gi) using the following expression
gi= (vi / (vi+Gi)), where vi is minimum QoS for the ith session which is a constant.
This power index will ascertain the optimal power to be alloted to each service channel(each data rate for different services).
Pi = (gi*No*W )/ (Hi*(1-(Sgj)
where No is AWGN(Additive White Guassian Noise)a constant,
Hi is path loss which is dependent on the distance and is a constant for a path,
and Sgj is sum of the power index of all the sessions which is constant for all sessions of the radio frame.

From the above analysis, we observe that when the mobile is sent the optimal power at which it should transmit. It can backtrack and calculate the power index and spreading factor and hence the Data rate is changed accordingly. This step can be considered to be an equivalent to the Rate Matching Algorithm explained above. The method and algorithm to schedule optimal power is detailed in the IEEE paper 765366 Dynamic Resource Scheduling for Variable QoS Traffic in W-CDMA - Ozgur Gurbuz, Henry Owen.

Thus, we conclude that by adjusting the optimal power we are actually trying to implement a rate matching step.

The Mobile Station(MS) performs Matching of Traffic Descriptors such as Peak Cell Rate(PRC),Sustainable Cell Rate(SCR) and obtains the connection parameters like average cell rate, SIR, Delay from them. These parameters are sent to the Base Station(BS) where they are queued in a FIFO. The BS determines a spreading factor which allocates the Orthogonal Varible Spread code(OVSF) using Gi = W / Ri,where W=system bandwidth which is a constant for a system and Ri= data rate of radio frame.
The base station calculates a value of power index gi= (vi / (vi+Gi))and hence Power levels using Pi = (gi*No*W )/ (Hi*(1-(Sgj)), where S stands for sumof, and transmits them to the MS. This information is conveyed to the MS using TPC(Transmission Power Control) bits and a closed loop power control method as explained in section 5.6 above is performed to obtain the final value of power at which transmission should be done.The method and algorithm to schedule optimal power using Dynamic Resource Scheduling is detailed in the IEEE paper 765366 Dynamic Resource Scheduling for Variable QoS Traffic in W-CDMA - Ozgur Gurbuz, Henry Owen.

The Base Station receives a Pilot Signal from the Mobile station and calculates BER based on Distance,Transmission rate and No of Users in the Cell. Ptk is the transmitted signal power which is expressed by the power control function g ( rt , k ), a function of the distance from the mobile to base station, Ptk= g(rt,k)Po where Po is the maximum transmission power. The optimum power functions are transmitted to the Mobile station which calculates the optimal power and starts transmitting at that value. Thus meeting the required QoS parameters.The method and algorithm for optimal power control is detailed in the IEEE paper 503476 Optimal power control law for Multi-media - Multi-rate CDMA systems - Shee Yao and Evaggelos Geraniotis .

NOTE: The analysis presented below is with respect to the IEEE Papers published between 1991-2003 which focus on the aspect of Quality of Service and its Management using various paramters like Rate matching, Power control, Variable Spreading Factor etc. 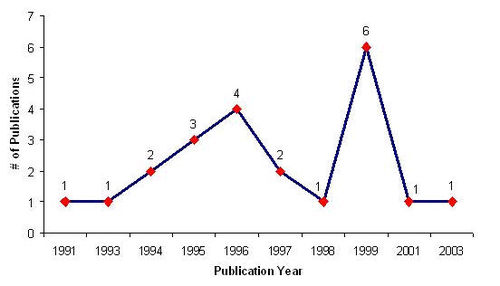 The above analysis suggests a increase in the Research activity in the area of QoS Management in the year 1999. 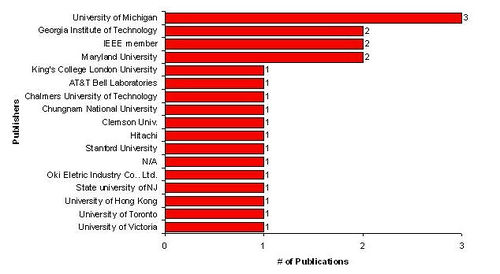 It is to be noted that the non patent research is attributed mostly to universities in USA and Asia Pacific. The mention of IEEE member in the above graph indicates the absence of information about the parent department of the Researcher. 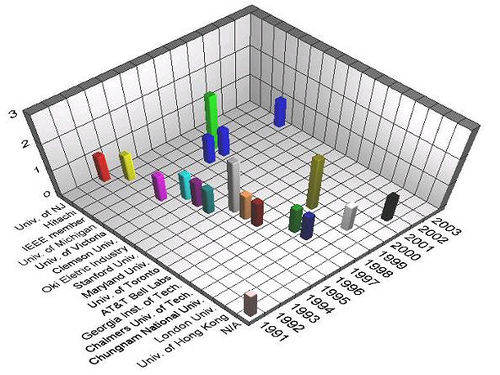 Graph showing number of publications by the publishers during 1991-2003

Substantial amount of research has been done in the field of QoS in CDMA communication system in the year 1998-99 and this has led to the invention of multitude of methodologies ranging from power control to Rate matching and Dynamic Resource scheduling, all with the sole aim of improving QoS.