Total Prevalence of Diabetes & Pre-diabetes (US)

Calories and food consumption - US

Maintaining a healthy weight is a challenge for most Americans

Weight change = calories in – calories out 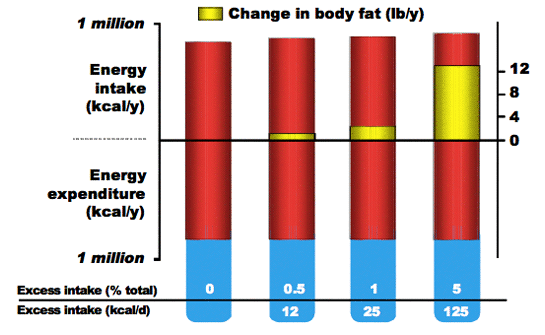 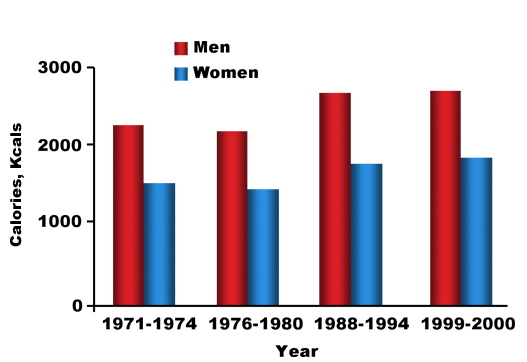 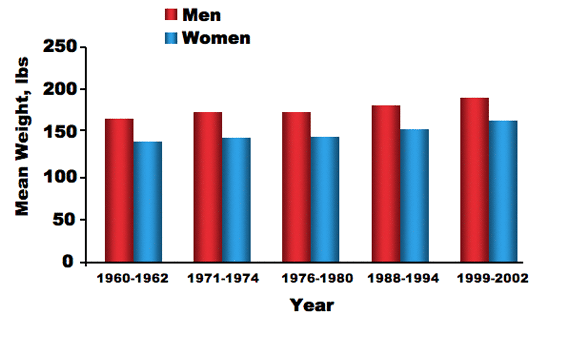 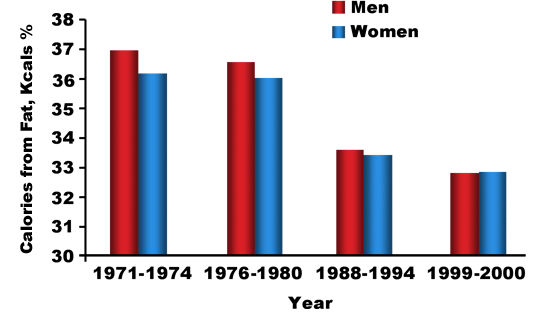 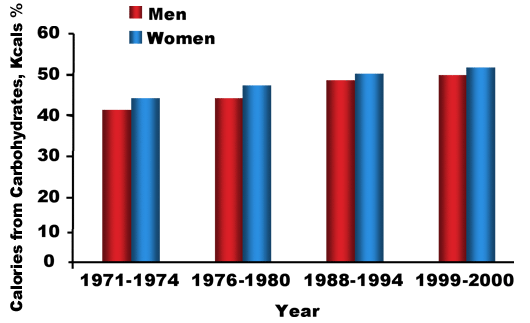 Dietary habits can help pile on the pounds 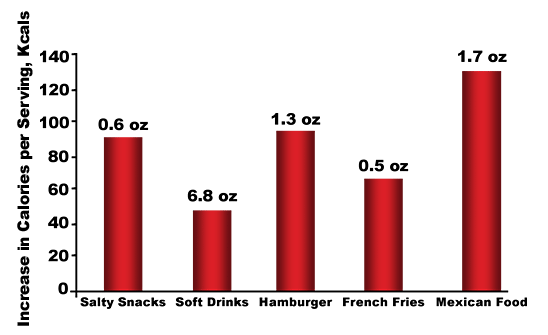 Diet and exercise can make a difference in your overall health 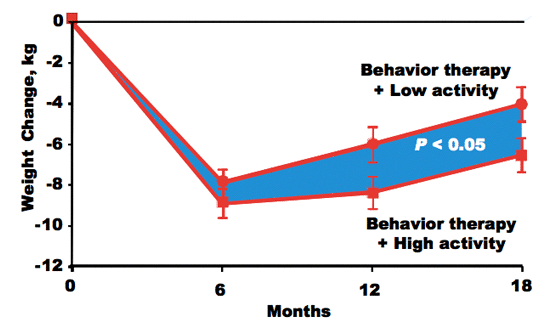 The Universe for Reducing Calories is Expanding

Prevalence of overweight and obese adults is increasing 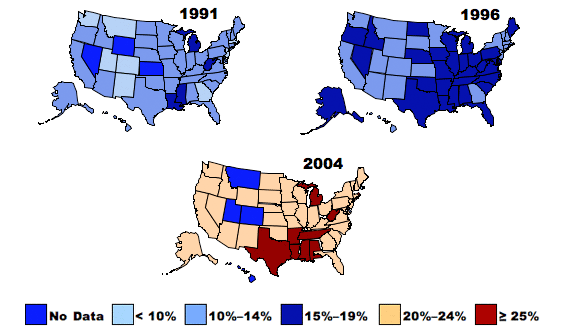 Prevalence of overweight among children has tripled 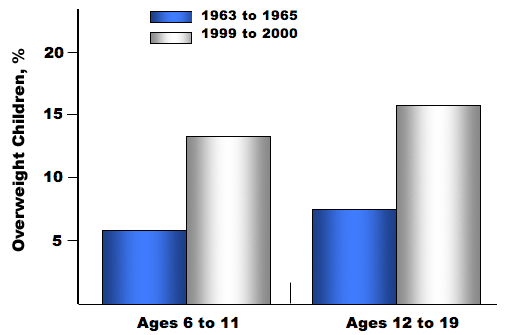 Body mass index (BMI), calculated with height and weight, is used to define overweight and obesity 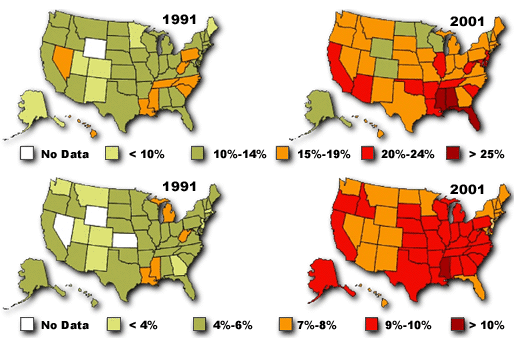 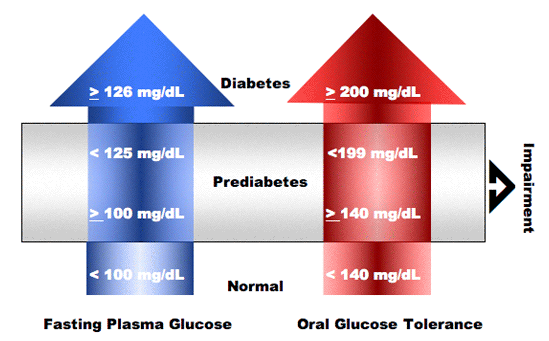 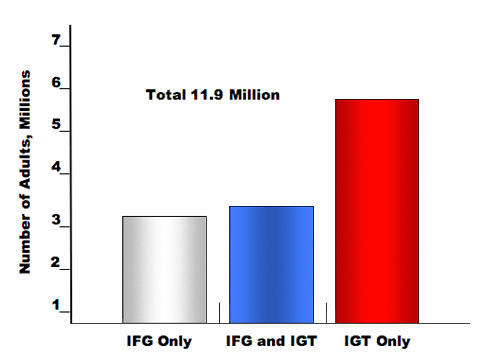 Obesity and diabetes can be prevented

The Essential Elements of Diet Menus for Diabetes

Diet menus for diabetes need to be

Carbohydrates come from a wide array of foods - bread, beans, milk, popcorn, potatoes, cookies, spaghetti, corn, and cherry pie. The most common and abundant are sugars, fibers, and starches. The basic building block of a carbohydrate is a sugar molecule, a simple union of carbon, hydrogen, and oxygen. Starches and fibers are essentially chains of sugar molecules. 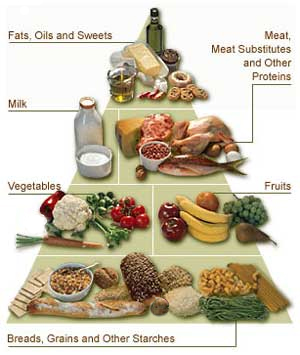 Foods contain three major types of nutrients: carbohydrates (carbs), proteins and fats. Carbohydrate foods most often come from plants, such as fruits, vegetables and grains. Carbohydrates are chains of sugar molecules; thus, they have the greatest effect on blood-sugar levels when these chains are digested (broken down).

Complex carbohydrates are longer chains of sugars. They are absorbed more slowly into the blood and cause a slower change in blood sugar than simple carbohydrates. 90-100% of the carbohydrate (CHO) eaten converts to sugar (glucose) within 15 minutes to 1.5 hours. Only 58% of the ingested protein, and less than 10% of fat, are converted into sugar within several hours after consumption. Source

Carbohydrates and the Glycemic Index

A new system for classifying carbohydrates known as the glycemic index, measures how fast and how far blood sugar rises after you eat a food that contains carbohydrates

White bread, for example, is converted almost immediately to blood sugar, causing it to spike rapidly. It's classified as having a high glycemic index. Brown rice, in contrast, is digested more slowly, causing a lower and more gentle change in blood sugar. It has a low glycemic index.

Diets filled with high-glycemic-index foods, which cause quick and strong increases in blood sugar levels, have been linked to an increased risk for both diabetes and heart disease. Source

Factors that influence how quickly the carbohydrates in food raise blood sugar include:

Carbohydrates and the Glycemic Load

The long-held belief that eating foods containing "sugar" (sweets) will cause your blood glucose levels to rise higher and more quickly than starchy foods (bread, rice, pasta, etc.) has not been supported by scientific evidence. Both are forms of carbohydrates and both cause blood glucose to increase.

Carbohydrates are mainly found in three food groups: Fruit; Milk and Yogurt; and Bread, Cereal, Rice, Pasta and Starchy Vegetables. You will need to consider the total amount of carbohydrates when working out your daily meal plan.

With carbohydrate counting, you can pick up almost any food product off the shelf, read the label, and use the information about grams of carbohydrate to fit the food into your meal plan.

Carbohydrate counting is most useful for people who take multiple daily injections of insulin, use an insulin pump, or who want more flexibility and variety in their food choices. The amount and type of insulin you are prescribed may affect the flexibility of your meal plan.

A registered dietitian can help you determine how much carbohydrate, as well as other foods, you should include in your daily meal plan.

Carbohydrate counting may not be for everyone, and the traditional method of following food exchange lists may be used instead.

Fiber is the indigestible part of plant foods that plays an important role in the digestive process. Fiber helps move foods along the digestive tract and adds bulk to stool to speed its passage through the bowel and promote regular bowel movements. Fiber also delays sugar absorption, helping to better control blood glucose levels. In addition, fiber binds with cholesterol and may reduce the level of cholesterol in the blood. Lastly, fiber helps prevent constipation and reduces the risk of certain intestinal disorders.

The goal for all Americans is to consume 25 to 35 grams of fiber per day. The best way to increase your fiber intake is to eat more of these fiber-rich foods:

Beans and legumes are another excellent source of protein for humans. Beans do not contain all the essential amino acids when cooked in their usual manner, but through sprouting (link to sprouting) them you can enjoy a full spectrum of amino acids in an alkaline forming low glycemic index food. Source

Legumes are a dense source of carbohydrate and certain amino acids. They are rich in fiber which helps to keep you clean on the inside. Low on the glycemic index legumes are a great source of energy for an active body. Legumes: Almost all legumes have a moderate glycemic index. They also provide a source of water-soluble fiber that is valuable for lowering cholesterol. They also provide phytoestrogens, which may provide health benefits. Source

Most dairy products have a low glycemic index. However, some people do not tolerate dairy very well. Source

Fruits are generally in the middle of the road in terms of glycemic index; but dried fruits, which are concentrated, have a higher index. Drinking fruit juices will definitely increase blood sugar release. Therefore, fruit juices should be limited or diluted with three-fourths water. Source

Most sweeteners such as honey, molasses, sugar, and white grape juice concentrate tend to have a high glycemic index. Rice syrup and granulated rice sweeteners may be used instead. The artificial sweetener aspartame may increase insulin resistance over time. Source

Grains such as rice, wheat, and corn tend to have a high glycemic index, but grains such as buckwheat, millet, barley, rye, and bulgur are actually quite low. For successful weight loss and blood sugar control, this group of foods should be used in moderation. Also, the addition of fats such as olive oil or butter (in moderation) can lower the glycemic index. Source

The gel-forming property of soluble fiber sources such as oats and barley has been proposed as the mechanism by which these grains reduce both cholesterol and glucose and insulin responses.

Boiled whole kernels and larger particle sizes are associated with lower glucose and insulin responses for a variety of grain sources. 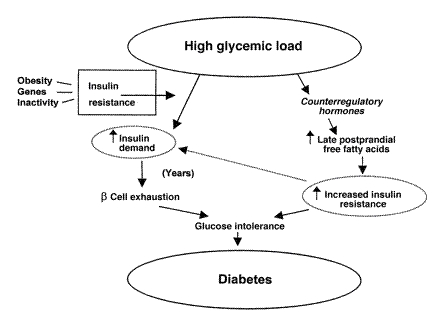 Party and Reception or other "Occasion" Foods

AX-rich fiber was extracted from the byproduct of wheat-flour processing. Arabinoxylan (AX) is a hemicellulose that has a xylose backbone with arabinose side chains. Postprandial glucose and insulin responses were improved by ingestion of AX-rich fiber. Further research is required to determine whether AX-rich fiber is of benefit to people with type 2 diabetes. Source

Detailed information on breakdown of food and fat

Insulin secretion in beta cells is triggered by rising blood glucose levels. Starting with the uptake of glucose by the GLUT2 transporter, the glycolytic phosphorylation of glucose causes a rise in the ATP:ADP ratio. This rise inactivates the potassium channel that depolarizes the membrane, causing the calcium channel to open up allowing calcium ions to flow inward. The ensuing rise in levels of calcium leads to the exocytotic release of insulin from their storage granule. 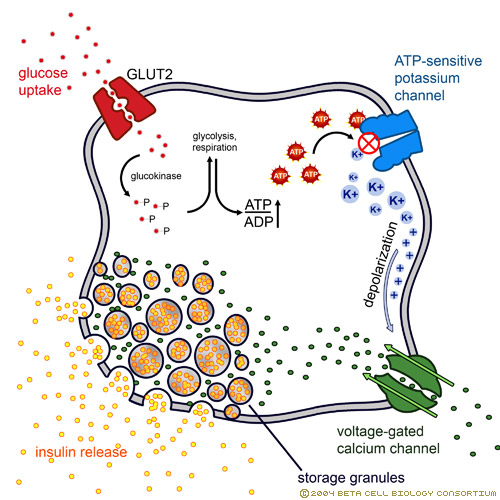 Insulin molecules circulate throughout the blood stream until they bind to their associated (insulin) receptors. The insulin receptors promote the uptake of glucose into various tissues that contain type 4 glucose transporters (GLUT4). Such tissues include skeletal muscles (which burn glucose for energy) and fat tissues (which convert glucose to triglycerides for storage). The initial binding of insulin to its receptor initiates a signal transduction cascade that communicates the message delivered by insulin: remove glucose from blood plasma (see panel 3). Among the wide array of cellular responses resulting from insulin ‘activation,’ the key step in glucose metabolism is the immediate activation and increased levels of GLUT4 glucose transporters. By the facilitative transport of glucose into the cells, the glucose transporters effectively remove glucose from the blood stream. Insulin binding results in changes in the activities and concentrations of intracellular enzymes such as GLUT4. These changes can last from minutes to hours.

As important as insulin is to preventing too high of a blood glucose level, it is just as important that there not be too much insulin and hypoglycemia. As one step in monitoring insulin levels, the enzyme insulinase (found in the liver and kidneys) breaks down blood-circulating insulin resulting in a half-life of about six minutes for the hormone. This degradative process ensures that levels of circulating insulin are modulated and that blood glucose levels do not get dangerously low. 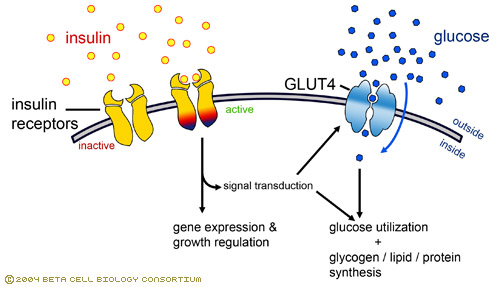 Insulin binding to the insulin receptor induces a signal transduction cascade which allows the glucose transporter (GLUT4) to transport glucose into the cell. 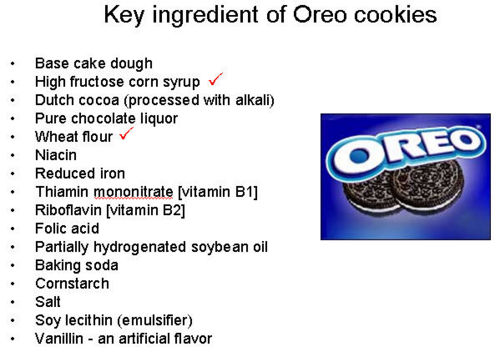 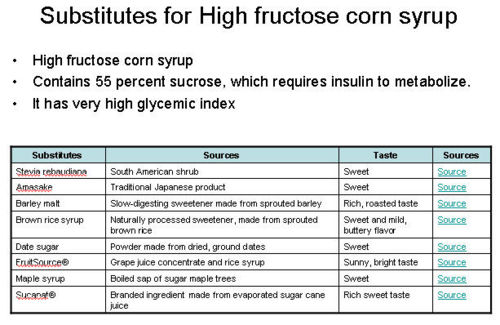 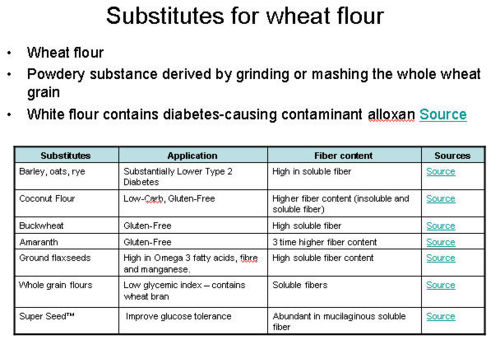 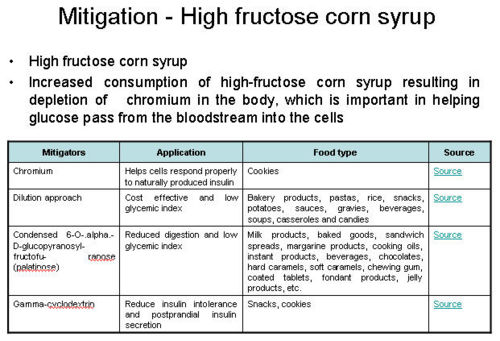 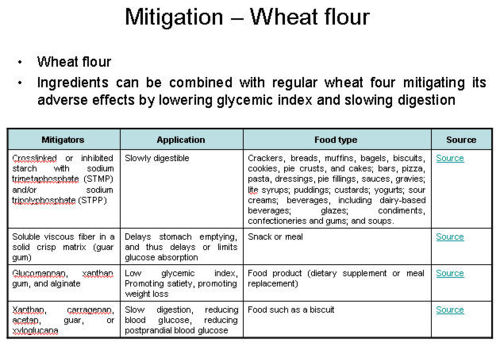 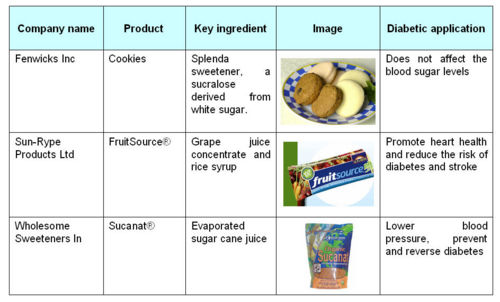 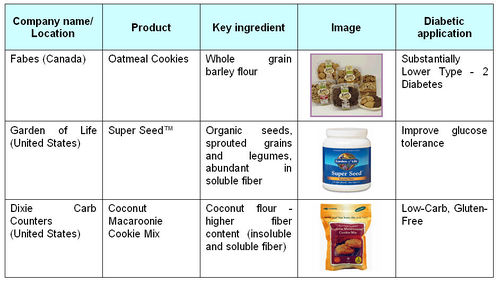