Dolcera dashboard provides quick and easy navigation through the technology segments. Below is the snapshot of how it look like. Click on the link Dolcera Dashboard for Pressure Sensitive Adhesives. 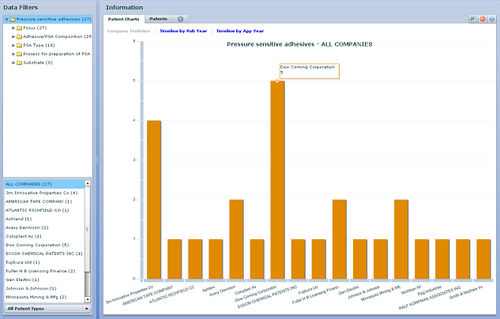 As the name "pressure sensitive" indicates, the degree of bond is influenced by the amount of pressure which is used to apply the adhesive to the surface.

PSAs are usually designed to form a bond and hold properly at room temperatures. PSAs typically reduce or lose their tack at cold temperatures and reduce their shear holding ability at high temperatures: Specialty adhesives are made to function at high or low temperatures. It is important to choose an adhesive formulation which is designed for its intended use conditions. 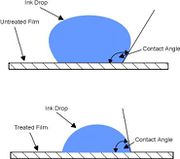 Application in electronics and electrical industry

Electrical grade PSAs are critical components in the design many of today's electrical and electronic components in the electrical industry. The construction of this type of PSA is difficult since lower concentration of conductive filler must be used in order to prevent the drying out of polymer by the conductive filler, with attendant loss of tack. The conductivity of electrically conductive PSA in the direction of pressure action is to a certain extend depend on the direction of pressure applied Florian, 2003 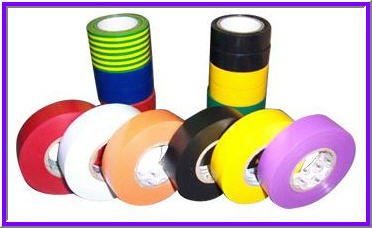 While mechanical fasteners will always be the choice when maximum torque and linear force are required in automobile industry, pressure-sensitive adhesives (PSAs) can often provide a better method of joining or bonding than traditional screws, nuts, bolts, rivets and welds.

The design, performance, and production reasons for replacing mechanical or fusion fastening methods with PSAs include, but are not limited to:

There are two essential requirements of medical PSAs, that they should stick firmly to a difficult substrate (skin) and that they should be easily and cleanly removed from that substrate when desired. These requirements would seem to be in conflict: a high peel force usually signals the ability to stick firmly, while a low force is needed when removing dressings by peeling.

A number of ways have been considered to resolve this conflict. These may be divided into two broad categories: those that make the best of existing PSA technology, broadly taking a physical approach, and those that introduce novel chemistry into the process. Physical approaches consider such details as the dependence of peel force on peel angle, peel rate, backing materials, the deformation of the skin during peeling and use of barrier films and solvents. As an alternative to simply making the best of the physics of the peeling process, various workers have devised chemical systems for making the adhesive less strongly adhering at the time of removal. These systems usually consist of introducing a ‘switch’ mechanism into a strongly adhering adhesive so that its adherence may be reduced significantly at the time of removal by operation of the ‘switch’. Means of activating the ‘switch’ include: heat (warming or cooling), application of water via an absorbent backing and exposure to visible light. These may produce physical or chemical changes in the adhesive Chivers, 2001

Transdermal or through-the-skin delivery of drugs has assumed an important place in drug therapy, eliminating many of the shortcomings of syringes and pills. Active Transdermal Delivery Systems The three most commonly used adhesives used for transdermal delivery are polyisobutylenes, polyacrylates and silicones Tan and Pfister, 1999

Although PSPs can be obtained by different polymerization processes (i.e., emulsion, solution, hot-melt, or radiation curing), much attention has recently been devoted to the utilization of more environmentally friendly processes such as emulsion polymerization. Soft polymer networks are commonly used as previous termpressure sensitive adhesivesnext term (PSAs). This is due to their unique ability to deform and yet to resist flow. These contradictory requirements indicate that the mechanical properties are finely tuned, and that the types of deformation upon application are carefully considered. Variety of PSAs can be prepared by mixing a linear vinyl terminated polymer with a silane terminated f-functional cross-linker. Jensen et al., 2009

Effect of important parameters on PSA making and performance

In a study wherein polymer molecular weight and polymer microstructure were regulated using different chain transfer agent (CTA) concentrations and by addition of a diacrylic monomer (MM) it was shown that all of the measured adhesion properties strongly depend on molecular weight of the synthesized polymer and on the amount of gel phase Kajtna et al., 2009

Effect of composition on Mechanical behaviours and fracture energy of PSAs

In a study it was shown that the mechanical behaviour depend on their composition but majority of fracture energy is dissipated on the first millimetre near the bending zone where fibrils elongation is maximum. Observations of interfaces between PSAs and glass substrate underline that fracture energy varies linearly according to the contact area Horgnies et al., 2007

Effect of tackifier on PSAs

To study the effect of tackifier (such as hydrogenated cyclo-aliphatic resin) a model system consisting of polystyrene-b-polyisoprene-b-polystyrene triblock copolymer was prepared. Tackifier increased the peel adhesion significantly and the increase became stronger above 40 wt% tackifier. The higher peel adhesion was obtained in the system with the larger amount of agglomerates of tackifier in the polyisoprene matrix. Sasaki et al., 2008

The fracture energy (fracture toughness) of tapes during globally elastic unpeeling is often calculated from the relation G=P/b(1−cos θ). A study suggested that this expression is correct for elastic peeling from rigid substrates but it gives misleading results when peeling from reversible flexible substrates. Steven-Fountain et al., 2002

PSAs polymeric materials effect tack, peel and shear strength . Inherent properties such as copolymer composition and microstructure, molecular weight and distribution are among the most influential factors affecting PSA properties directly as well as indirectly through their influence on physical properties (e.g., the glass transition temperature, Tg) and thus, rheological properties of the polymer (e.g., viscoelastic regions, moduli).

Therefore, PSA is the result of a fine balance between these three major, interrelated properties.

It is a measure of the force required to remove, say a foam gasket and its adhesive, from the substrate. It usually refers to the initial attraction of the adhesive to the substrate. Tack can be measured by four basic methods these are loop tack, rolling ball, Quick stick and probe measurement devices. Review Of Methods For The Measurement Of Tack

Peel strength is measured as a force required to remove a standard PSA strip from a specified test surface under a standard test angle (e.g., 90° or 180°) under standard conditions. Much like tack, manufacturers control adhesion to create different products based on user requirements. After a PSA has been applied to the substrate, adhesion continues to increase for a period of time — typically 24 hr.

Shear strength is the internal or cohesive strength of the adhesive mass. Usually, it is determined as the length of time it takes for a standard strip of PSA to fall from a test panel after application of a load. Usually, tack and adhesion decrease as shear strength increases. Emulsion-Based Pressure-Sensitive Adhesives: A Review

The most common products that utilize PSAs are tapes, labels, and protective films. The PSA sector is among the fastest growing in the adhesive market, making the search for new pressure-sensitive products (PSP) and applications highly competitive.

PSAs exact a considerable cost on the paper recycling industry, an estimated $700 million per year. Most paper recycling systems converts paper into pulp in presence of water, which is then transformed back into paper. PSAs do not dissolve in water, but rather fragment into smaller particles during the repulping process. These particles are known as stickies, get deformed under heat and pressure, making them difficult to screen or filter out of the pulp. Stickies can become lodged on papermaking and can cause damage to equipment or even in the paper. Source 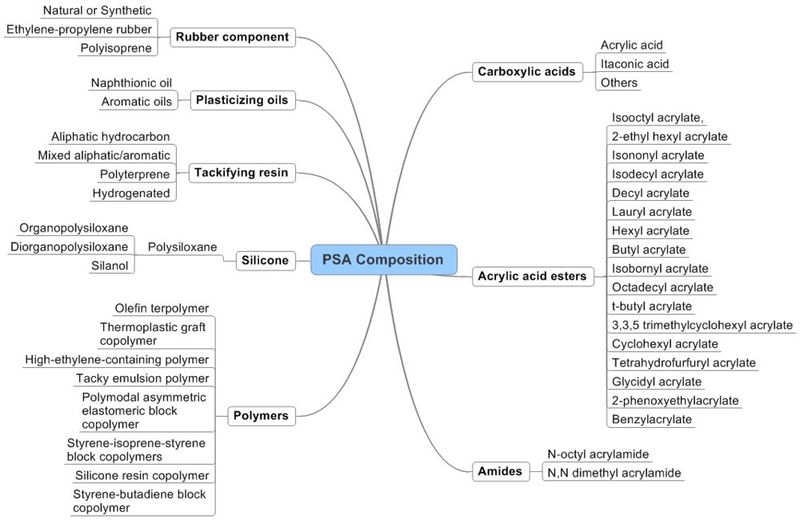 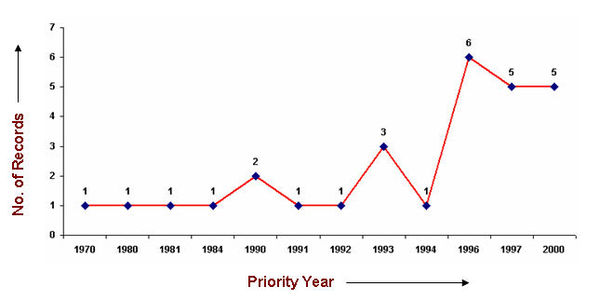 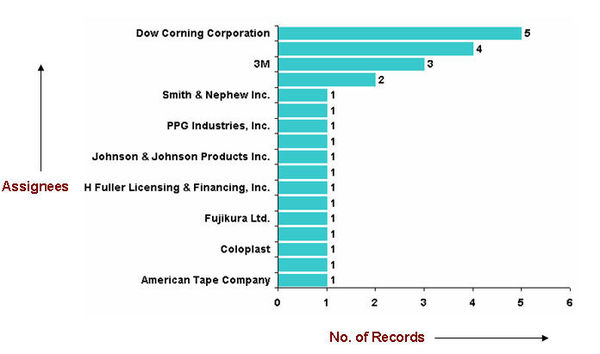 As it is evident from the the technology tree below, although the IP activity in the area of Pressure sensitive adhesive was initiated during 1970s, companies are continuously trying new combinations of different components. 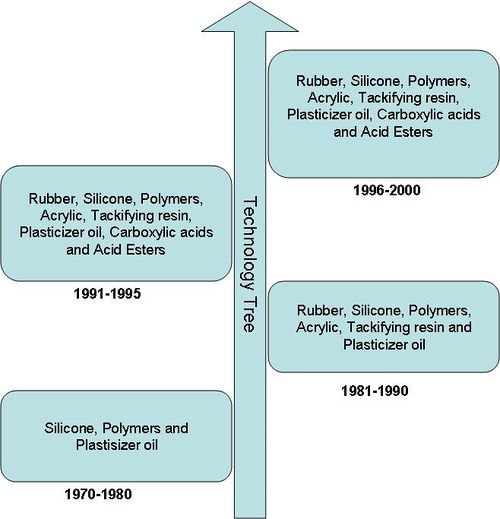