A market study on Hybrid vehicles and the concept of V2G

Unlike an internal combustion engine (ICE) that is tuned to specifically operate with a particular fuel such as gasoline, diesel or natural gas, an electric drive vehicle needs electricity, which comes from sources such as batteries or a generator. This flexibility allows the drive train of the vehicle to remain the same, while the energy source can be changed.

The electricity used to propel the vehicle may be provided in many different ways; it can come from any energy source, fossil fuels, nuclear power,and renewables (tidal power, solar, wind etc) and can either be supplied to the vehicle continuously as it is used or stored in the vehicle in some way, such as batteries, supercapacitors or fuel cells.

Below figure shows the architecture of the Vehicles along with the types. 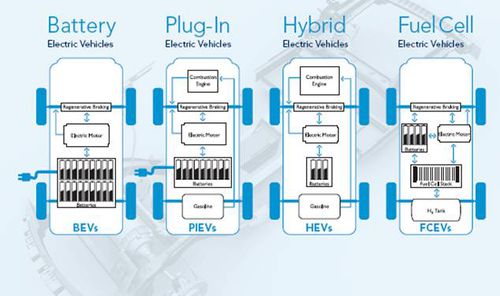 Below graph shows the historic sales of various Hybrid Electric Vehicles available in the market. 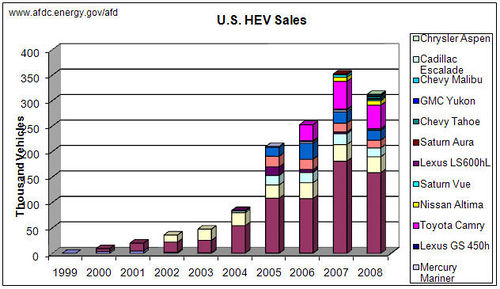 This image shows the forecasts done by various research agencies on future sales of Hybrid Vehicles. 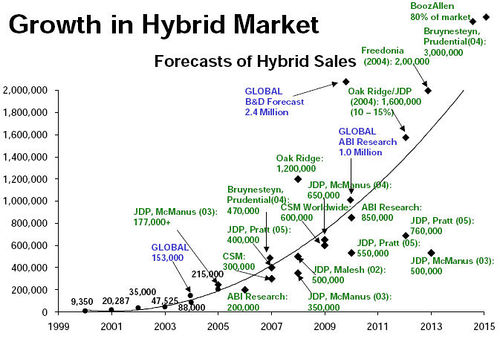 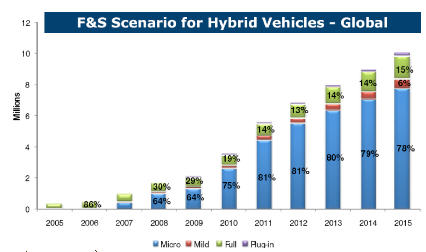 The below graph shows the forecast of Sales of hybrid vehicles in USA. 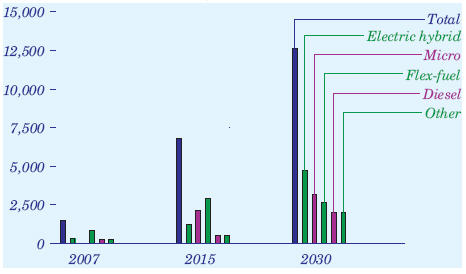 Restraints and Drivers for PHEV 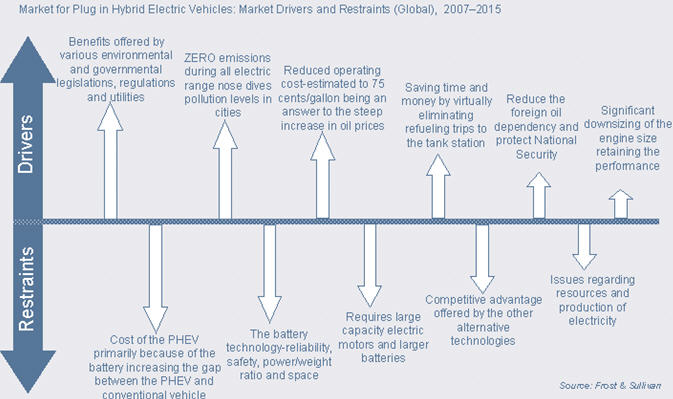 There are currently no known utility or private incentives offered in Arizona. 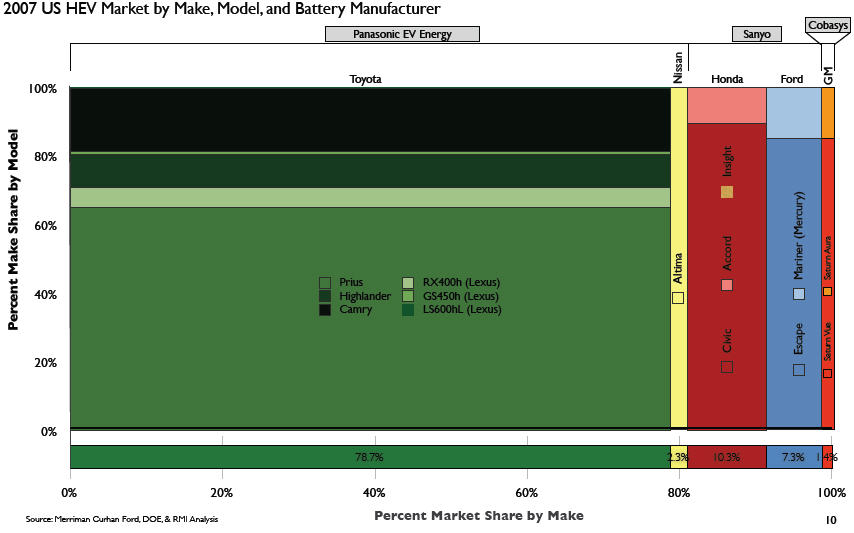 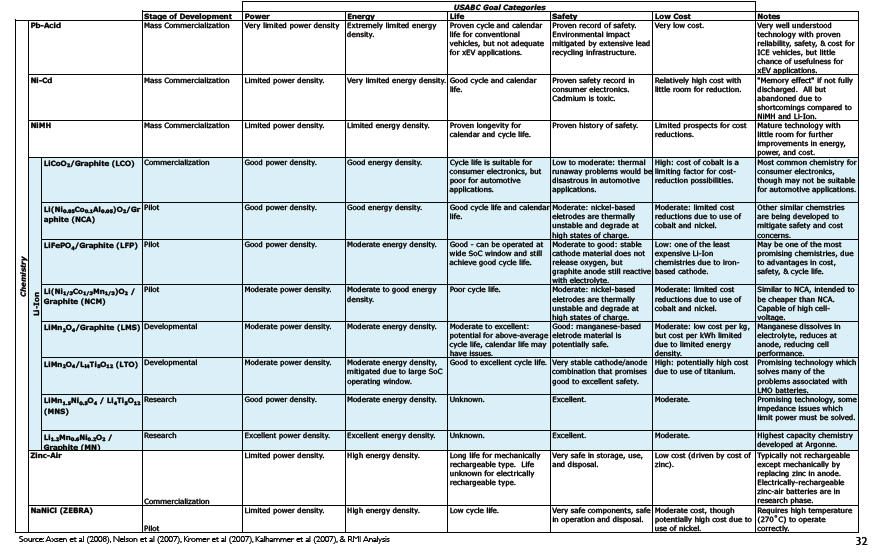 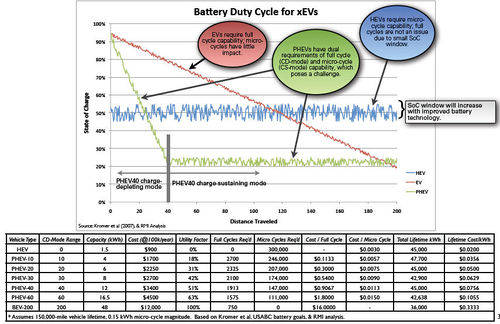 This table shows how use of Electric vehicles can help reduce GHG emissions.

Emission reduction Possible by use of Ev's 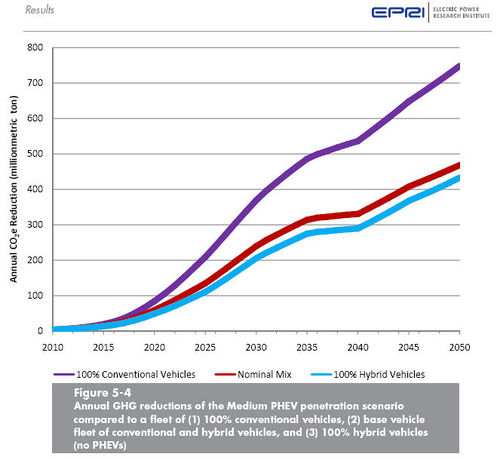 Emission reduction scenario in US by Penetration of hybrid car technology

(PH)EVs have a battery pack (energy storage device) and a charger. The charger can be bidirectional; able to deliver power back to the grid from the vehicle’s battery as well as charge the battery. Typically, the battery recharge time is only a few hours. Since most vehicles are generally in use just a couple of hours per day, there is a flexibility to the timing and power profile of how and when vehicles are recharged, or even discharged into the grid. Kempton’s concept of V2G is based on such vehicles with remotely controlled, bidirectional chargers providing services to the electric power grid. The services that these vehicles provide to the grid have a value that may result in payments back to vehicle drivers, resulting in lower vehicle operating costs. 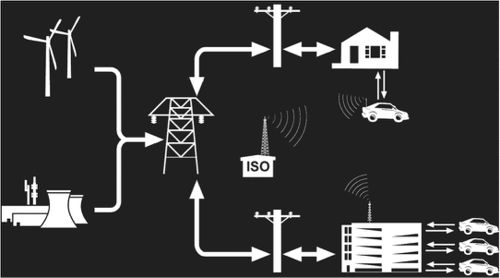 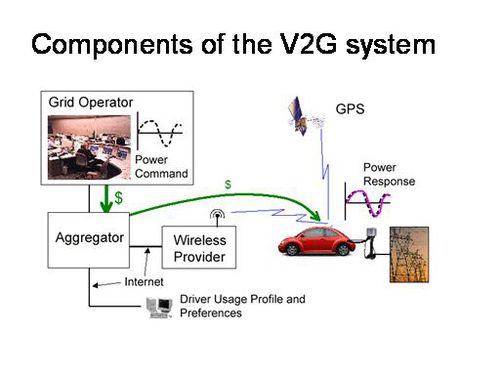 In order to make V2G work properly, service providers (aggregators) will be required to organise MW-size ‘blocks’ of regulation/reserve/peak power. These service providers need to be able to communicate with the vehicles to obtain vehicle location, battery state-of-charge, owner preferences, and to transmit ‘charge’ or ‘dispatch’ signals.

Metering of the V2G contribution to the grid of individual vehicles can be done with residential ‘smart’ meters, which are widely commercially available. Both in the US and in the EU, taskforces/working groups are working on standards for smart meters (US: UtilityAMI/OpenHAN, EU: NTA 8130).

Another option is to use an on-board metering device; this seems to make more sense in the case that the vehicle is controlled by an aggregator.

Several ‘smart grid’ companies in the US are active in providing communication solutions between V2G-vehicles and TSOs/aggregators; examples are V2Green and GridPoint.

In the US, The National Electric Infrastructure Working Council (IWC, organised by EPRI) is working with the automotive industry to define a communications standard, enabling EVs to communicate to their charging infrastructure. The IWC is working closely with the SAE J1772 (EV charging standard) committee.[2] 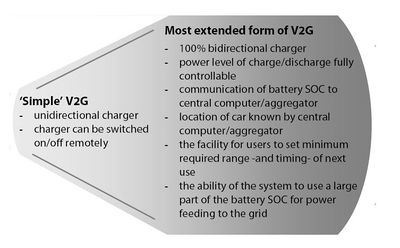 PHEVs have advanced batteries with a storage capacity of 4 to 15kWh, giving the vehicle an electric-only range of 15-80km. EVs generally have 15 to 50kWh on board, for a range of 80-300km. (PH)EV batteries should be able to provide a power of at least 30kW, to ensure convenient acceleration. The DC voltage of PH(EV) batteries is generally between 180V and 400V DC.

Since individual battery cells have a voltage ranging from 1.2V to 3.6V, (PH)EV batteries are built from ±hundred to several thousands of battery cells. Such a multi-cell, high-energy battery pack requires complicated electronics and software to manage voltage, current levels and temperatures for each individual (module of) cells. This system is called the battery management system (BMS). The BMS also keeps track of the state-of-charge (SOC) of the battery, and controls the maximum power level of the charger and the maximum regenerative breaking level.

(PH)EV chargers have an output voltage of 180-400 Volt DC. If they are rated for a standard 220V AC socket, their maximum (dis-)charge power in Europe is generally ±3.5kW. In the US, the residential socket output is 110V, and maximum power output limited to ±1.5kW. If a two-phase AC outlet is used, a much higher charge power can be drawn (15-20kW is the current state-of-the art).

In many European countries, there is a 2-phase 380V connection inherently present in every home, since the electricity system brings a 3-phase cable (3 x 220V) to every household. A 380V socket can then easily be added to a residential or small business connection. Most V2G research goes from the assumption that future (PH)EVs will have a charger with a (dis-)charge power level of 10-20kW, and that there will thus be dedicated EV charging connections installed in the house of (PH)EV owners.

The battery management system controls the maximum charge level of the charger, which is usually connected to the BMS via a CAN-interface. In order to let the battery deliver power back to the grid, either the charger needs to be bi-directional, or a separate DC-AC inverter is required.

Ideally, a GPS device keeps track of where the vehicle is and an on-board electricity meter measures in- and outflow of electricity.

In a less advanced V2G scenario, it is not the on-board meter that measures electricity consumed and generated by the vehicle, but a (smart) residential electricity meter.